Posted on December 12, 2016 by Travelling Tanya

After a wonderful nights sleep we headed to Jodhpur- 6 hours away.

Half way there we stopped in a small village for lunch. We walked approximately a km through the village to reach our lunch spot, which was an old mansion converted to a small hotel with a large courtyard.(which I think would be a more appropriate retirement spot for those looking for the Marigold experience). 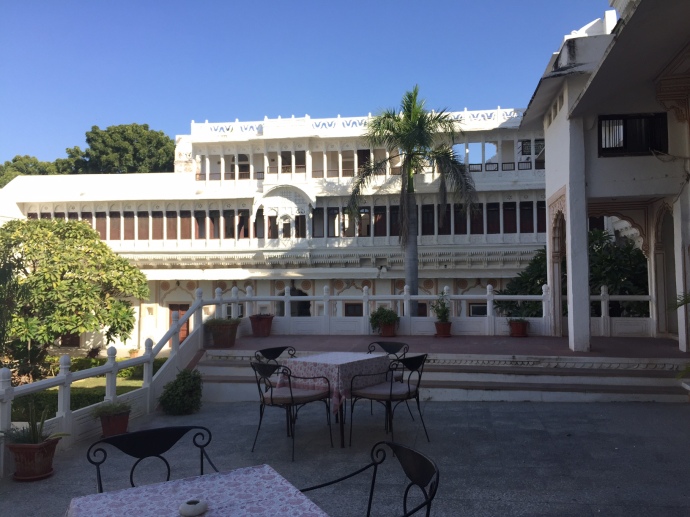 The locals – young and old-waved, said hello, and showed general interest in the foreigners traipsing through their village. 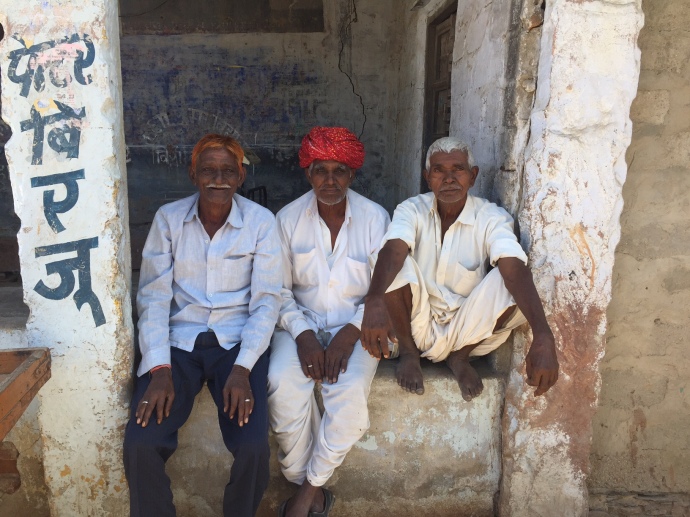 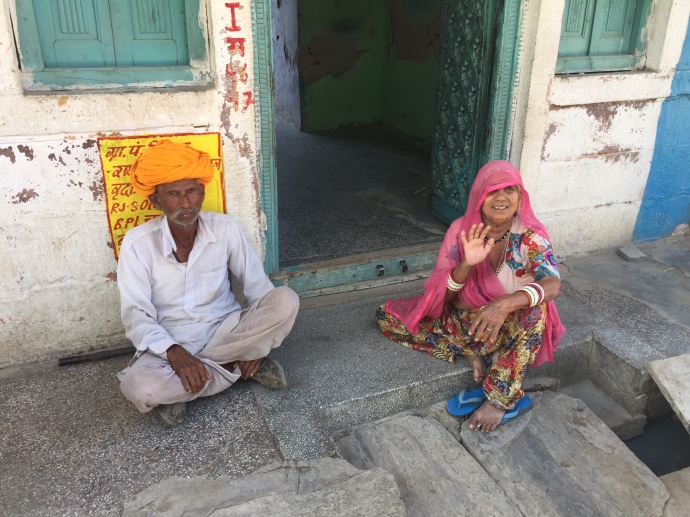 When we arrived in Jodhpur we were transferred from our van into several tuk-tuks as the lanes were too narrow and winding for our van. We all felt like we were somewhere foreign. There was a more Muslim influence and a different energy to the streets.

We turned off the bustling alley onto our hotel property – a quiet sanctuary and courtyard. There were tiny round orangey-red lights in the ground that made the path to reception. The architecture at the RAAS hotel is very striking and we had views of the hillside fort – from the roof top terraces, from our personal inner court yard terraces and even from our bathtubs!!! 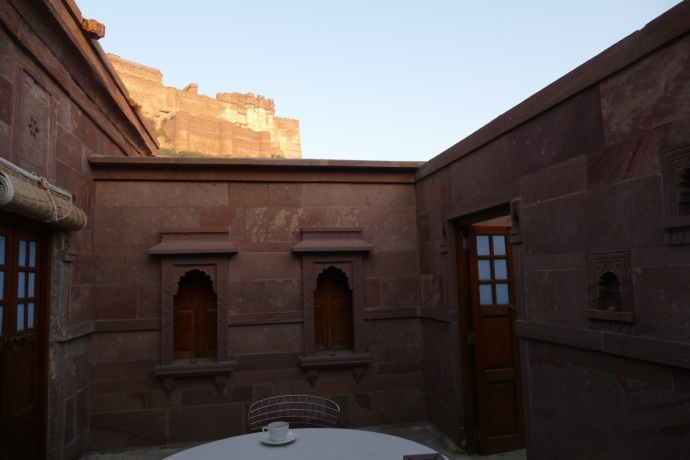 Our tour of the fort and city was a little too ‘history and fact laden’ (for my liking) and I felt like I was back in grade 8 social studies class trying not to fall asleep as the teacher monotonously droned on, and on!

We then went to a flea market – locally referred to as the “wash and cry market”( because when you get your item home and wash away the dust you cry in disappointment!) The sari area sells used saris- many coming off bodies taken for cremation. 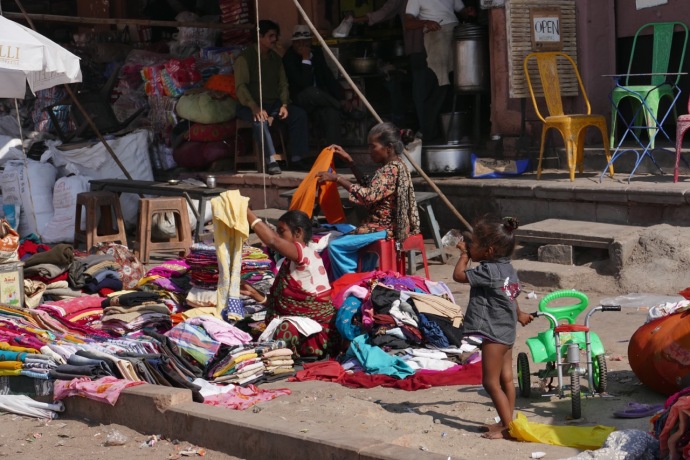 Everything you can imagine was sold at the market – bracelets, millet, kitchen wares, clothes, spice, toys… the list goes on. And if you didn’t find what you were looking for, you could always enjoy a shave. 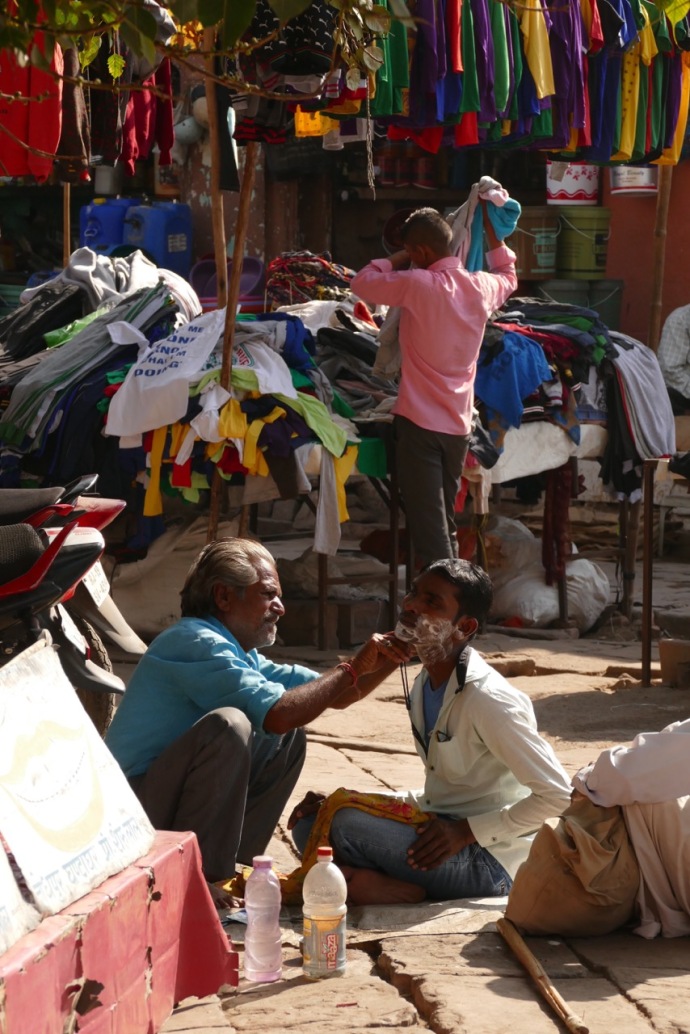 Just as we were leaving the wash and cry market Bevan received “luck” from a pigeon!

We were then led into a textile wholesale store. We were told it was wholesale, that we could not buy, we were just being shown the most beautiful and luxurious textiles made in India. We were told that top fashion houses around the world – Hermes, Brunello Cucinelli, Donna Karen etc have some of their items made here. After showing us 20 different items they went in reverse giving us local prices, the European and American inflated prices, asking which ones we wanted and showing us samples in a variety of colours. So much for it only being wholesale. Apparently Brad Pitt bought 120 scarves – I think the salesman was challenging us to do better. 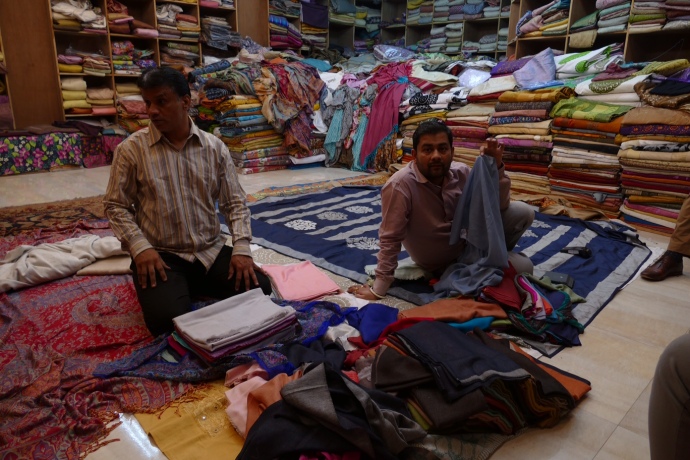 Bevan and I had instant memories of being back in Morocco at a carpet store. Dave said anytime they ask you to sit down they are going to try to get you to buy something! He was right. And “don’t sit down!”, became a phrase Kim and I would hear muttered as we entered many more stores to come! ( in retrospect it was very good advice, although ‘run!’ may have worked better). I did not buy very much. Kim did. But I did see one man on the street who bought slightly more than Kim. 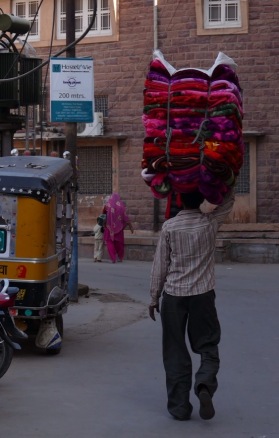 We enjoyed several hours at our resort and played Parcheesi, an Indian board game.

In the evening we were treated to a private show of the Bhopas . Typically the 14th century history takes 8 nights to tell but thankfully we had a condensed version. We were lucky to experience this private show as there are currently only 25 families who still know and practice this folkloric art that is nearing extinction. The two young brothers had such beautiful smiles as they played their instruments, danced and sang.They had a real passion for their art. The mother, we only could assume, enjoyed it too-but as custom has it, women cover their face with a scarf as they sing, so it was hard to tell. 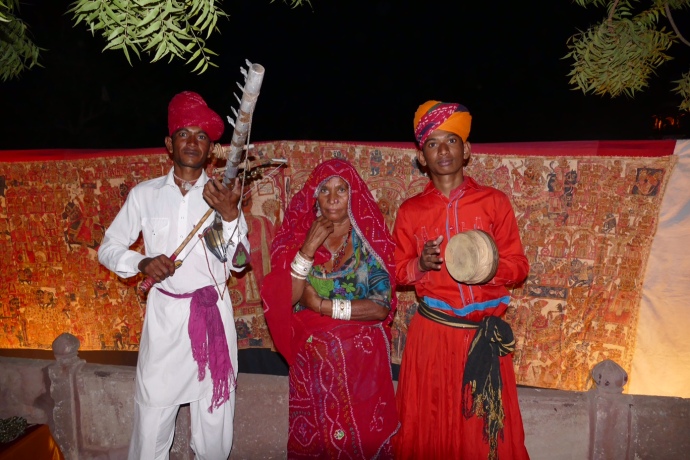 There was a horrendous stench on the street coming home as some running water was releasing layers of urine, dried cow dung (yes, dung, not tongue) and who knows what else. I was afraid I was going to toss my cookies so abandoned my worries about offending the locals and covered my faced with a balled up scarf. It saved my life I am sure! Looking back I should have just sang so nobody would be offended.

Jodhpur is known as the blue city as many of the homes are painted blue. 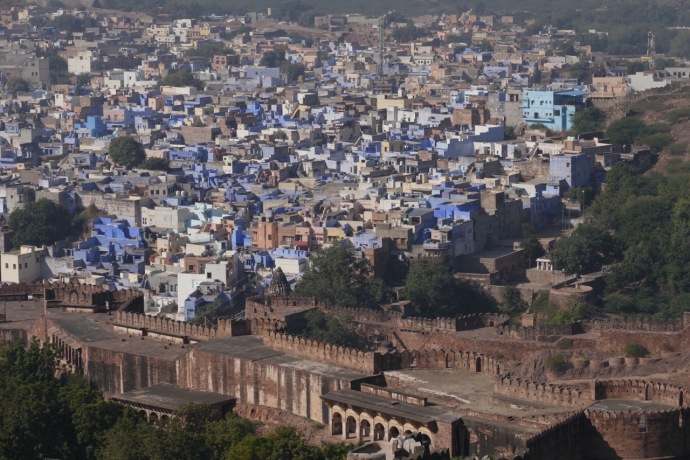 There is a much higher percentage of Muslims here than other areas we have been. The call to prayer was so loud (approx 5 am) that we were sure it was coming from our bedroom closet. I understand the history and use of the call but in centres where the majority are not Muslim it does not seem very respectful to the neighbours. By the second morning I found myself feeling very irritated at the morning call to prayer and think it should be renamed the ‘call to arms’. Perhaps stopping this practice could stop all the wars in this part of the world. Our one guide felt that if borders were removed, the Hindus and Muslims would have nothing to fight over. Could world peace be this easy?

Things I learned:
-purdy much everything is for sale in India
-if you ask a store owner for a very specific item they happily tell you they have it and then bring you something completely different
-Hindus are reincarnated 8.4 million times! (Not all human lives, can be bugs, birds, etc) That is a lot of lives. The Jain branch believes it is 84 times
– the Jain’s are strict vegetarians and do not want to harm even a flea- they don’t even ‘kill’ root vegetables

Other good blogs you should read