Posted on January 3, 2017 by Travelling Tanya

We head a little bit off the so called “beaten track” on this leg of the trip. We head further North to Jaislamer, the home of forts made from sandstone that glow golden during sunset. By this time we are getting a little tired of seeing forts but we are enjoying the look of fear on Dave’s face as we get closer and closer to the Pakistan border.

Our hotel is only a couple of years old but has been built to resemble a fort. It has a wonderful inner courtyard and our guide has ensured we get the two best rooms.

The rooms took up the entire back upper floor, and were two stories, including a private dining room and a dipping pool. (our two suites are the left and right of the little dome!)

The staff were very attentive and set us a beautiful table after a folkloric show at the hotel. We had a surprise menu that was absolutely delicious. 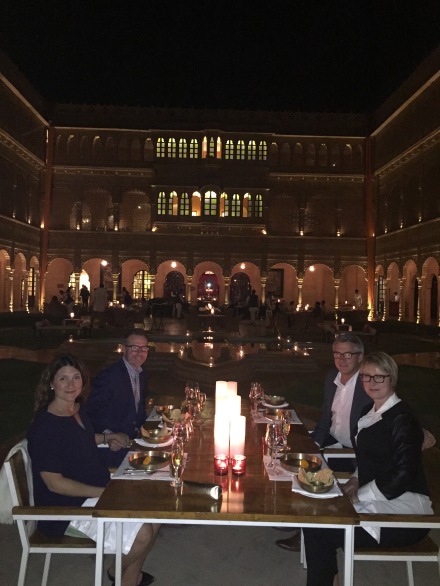 The next day we visited Gadi Sagar Lake, a man made lake, the Jaisalmer Fort, toured the old city and the  “havelies” – the mansions of the wealthy traders who grew rich on the trade passing through the desert. The absolute highlight of the day was heading further north, into the desert on camel!!! I had purchased camel riding shoes with bells and I was excited to wear them and listen to them jingle as we bounced along. I must say, I am petrified of horse back riding so I was feeling a quite a bit of angst. I was the first one up though and felt quite elated! (the fear returned as we started moving!!!) 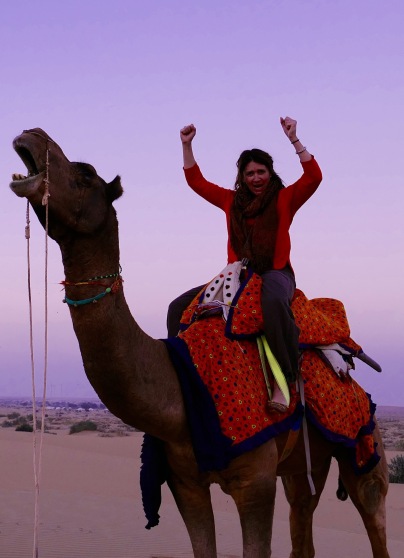 After approximately 40 minutes of bouncing along the desert ,we watched the sunset and enjoyed the company of our “camel jockeys”. They clearly love the camels and take good care of them. Alli, who lead my camel named Michael Jackson, loved Bevan’s jacket and petted it as I was petting the camels! I was thinking of offering it to him (yes ME offering BEVAN’s jacket to Alli- but I have learned my lesson after giving Bevan’s watch to our safari guide in Africa and then not being able to replace it when we got back home!) We all loved our camel ride although we all were a bit sore somewhere in the “saddle region!” 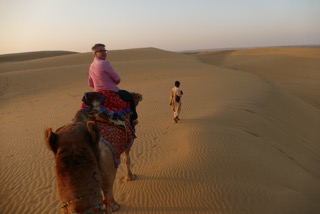 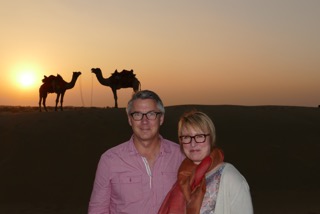 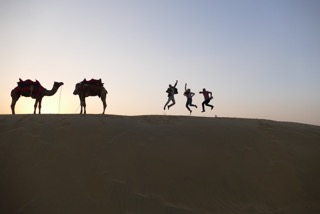 The following morning, after being force-fed several different Indian breakfasts in the beautiful courtyard, we headed off to Rohet, where we stayed in a Wilderness Camp that was made when Madonna visited Rohet but wanted to stay closer to where she was riding horses. Apparently Bevan and I stayed in her actual tent. I figure if Madonna can “rough it”, so can I.  Again, we were taken care of like royalty. We had an amazing meal followed by a campfire. We were all reflecting on how being in the second most populated country in the world, and we were the only people (other than our “caregivers”) to be seen. 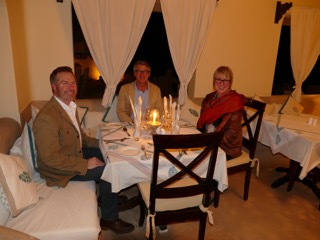 We felt very spoiled and privileged. In the morning we had a Jeep Safari around the countryside and visited a Bishnoi tribal village. The tribes are considered the first environmentalists of the world and have been protecting the flora and fauna for the past 550 years. 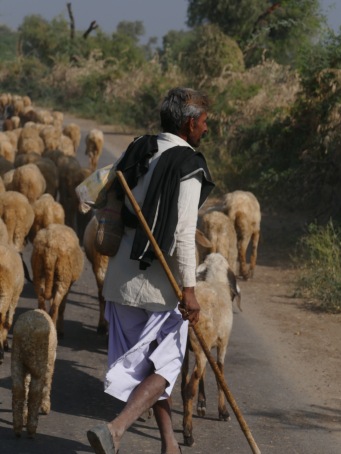 We saw some local crafts and local men participating in an opium ceremony. Apparently, our guide tells us, that opium does not affect the brain, but only gives energy. (hmmmmm!) 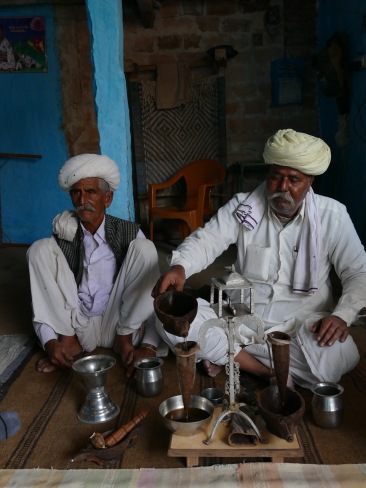 A few months ago, opium was banned by the government, so they were not using opium. (by the looks of things, they have used it quite a bit before! They did not have much affect and we did not really feel welcome.) This was my least favourite thing of the trip.

Back in the Van – not a hardship at all!

We next had a 4 hour drive to Udaipur, stopping on the way to visit a huge Jain temple built in 1439. The drive to Udaipur was really pretty – more lush, hilly and I was excited to see more monkeys! Some even jumped onto our van!!!

We stayed at the Lake Palace Udaipur, the summer home/palace of the Royal Family – whose main palace is across the lake. (nothing like “getting away!”) The hotel also was the site where one of the James Bond movies were filmed. Upon arrival there was a folkloric dancer and we were showered in rose petals. This time it was lighter out and I was able to enjoy it!

We enjoyed a lake tour at sunset and the next day had more sight seeing tours. Dave and I skipped the City Palace tour and I think Bevan and Kim had wished they had too. We visited a Hindu priest who “paints on water”- he even let me give it a try! Obviously he hasn’t heard what a klutz I can be! Thankfully I did not disgrace the religious water painting or my friends! 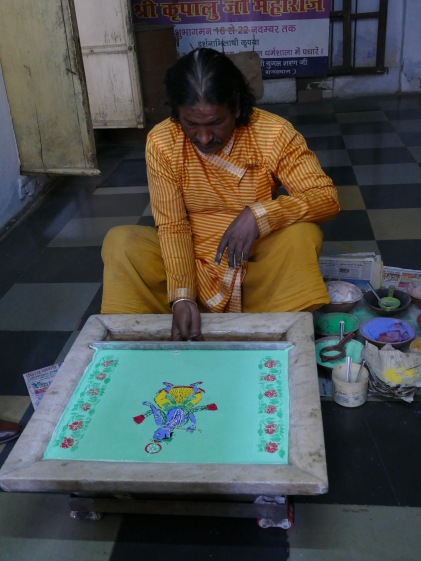 We had a beautiful supper at the Lake Palace – and the guys played chess in the lobby. James Bond is definitely not the most handsome man that has stayed at this hotel – I think Dave and Bevan win this prize.

From Udaipur we flew back to Delhi and had an amazing supper at “Indian Accent” the best rated restaurant in India. It was an amazing end to our trip. Kim and Dave left to the airport after supper and Bevan and I had one more day in Delhi. Our eyes were burning from the pollution and we could not see the sun on our last day. The smog is terrible. We cancelled our sight seeing and stayed in our suite all day long except to venture downstairs for meals. Perhaps were just missing our travel companions.

-Delhi has horrific traffic and pollution that made my eyes burn. I don’t know if I could tolerate the pollution in larger centres in China – so I may have saved lots of money by going on this trip.

-Men and Women are segregated in many line ups, especially if security is involved. Women are not allowed in temples during “that time of the month” and some are segregated at home as well. We would often see men sitting around the town/city squares having tea, but the women, if there, were busy with errands.

-there are many stores that are to “help women” -women make the items, get the money, etc….but we would only see men in the stores themselves. hmmm.

-although India is one of the dirtiest countries, if not the dirtiest,  I have been to, it still has a lot of beauty, colour, light and amazing people. Oh, and great food. Terrific food. MMMMMM. (I gained 7 pounds!)

-I was most amazed at the lack of culture shock I experienced. The only time I had discomfort was seeing extremely crippled (and I use this term purposefully) navigating the crowded streets on their belly or some type of skate board, if they were lucky. As a physio in a previous life, it was hard to even conceive how these poor individuals became so flexed and disabled. (?purposeful damage to growth plates/ tendons?)

-The edited version of the blog can look well spaced and fine – until it is posted!

-I also learned that Christmas doesn’t wait for you to be ready for it!!!

Next stop – Calgary and Christmas!!!!

Other good blogs you should read